A late night writing dump of Poetry. Still prepping for the rapidly approaching reading, and working on various projects. Life is taller than the Berlin wall, and twice as thick. I need a pick-ax that prevents sleep. 6/10/2012

Send me questions, condemnations, and critiques at:

Since January 2012 I have been developing and serializing a Crime Novel entitled: "It Takes a Monster". It has been a strange, and sometimes scary, process of heavy research and character creation. The novel has slowed in the past few months due to this weird and difficult thing we call "Life", but progress has begun again, like car battery gator-clamps jammed into a cardiac arrest vicitm.

I hope the novel will be finished, or at least pretty damn close to completion, by the end of 2012. We'll see what happens, it'd be nice to have something to shop around for a publishing contract and/or graduate school. 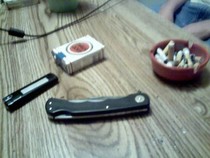